Started on a new lino print, originally intending it to be of two curlews but after some preliminary juggling around decided to leave the second bird out. 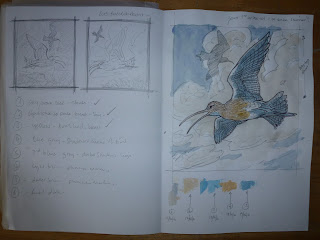 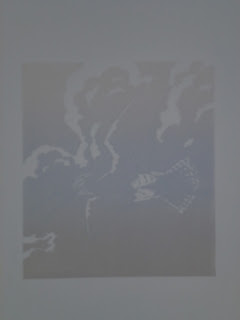 After cutting out the white areas, the first colour above, is a blend of 3 pale greys working from top to bottom. 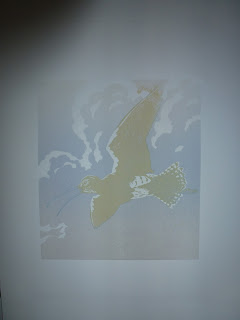 Next much of the cloud surrounding the bird is cut away and the block inked with a pale yellow brown. 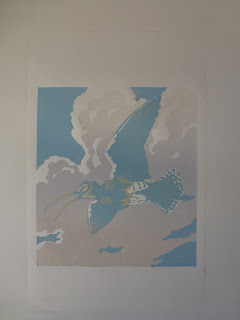 Colour 3 is a pale blue. I thought a lot about how to do this. Initially I was going to do it as a blue to pale blue grey blend as I needed the lower part of the print to look as if it was receding into the distance. In the end I decided on using a flat blue colour, relying on the greys of the cloud in the lower half to shift the appearance of the blue there making it look less bright than in the top half where it sits alongside the white of the paper. 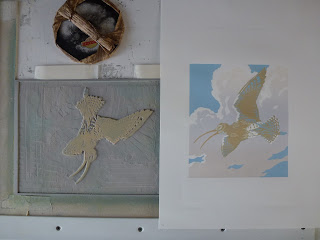 Colour 4. With the sky finished all that remains on the block is the shape of the bird, this is inked in a darker version of the first brown colour. 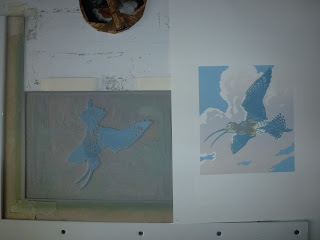 Colour 5. A darker blue completes the shadows under the birds wing. Should be finished after another couple of colours. Hopefully in time for the Art Market at Holmfirth next weekend. If not it will be finished for the Sheffield Print Fair in July.
Posted by Stuart Brocklehurst at 17:01