The Relics of St Cuthbert 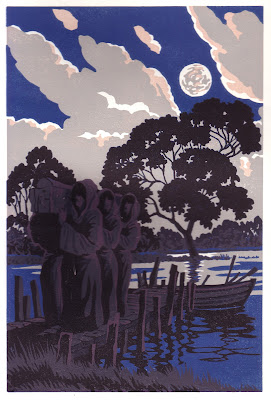 Unusually for me this is a narrative composition and interpretation influenced by a story and historical tradition, rather than a more straight forward response to the subject matter.

Although familiar with the landscape and history of Lindisfarne and the story of St Cuthbert, I was less familiar with a connection to the village of Fishlake near Doncaster in South Yorkshire. It was only when I went there to make some sketches of the carved Norman doorway that I discovered the traditional connection.

Cuthbert was prior of the monastery at Lindisfarne living there for about 10 years before moving to live the life of a hermit on the island of Inner Farne. For 10 years he lived there before being asked by both the King and Church to become a bishop. For two years he was a travelling bishop, journeying extensively throughout Northumbria. On feeling the approach of death he retired back to his hermitage on Inner Farne where he died on 20th March 687AD. His body was taken and buried on Lindisfarne. Pilgrims went to pray at his grave and miracles of healing were claimed, a clear sign to the monks of Lindisfarne that Cuthbert was now a saint in heaven and that they should declare this to the world. They decided to wait 11 years for his body to become a skeleton and then 'elevate' his remains on the anniversary of his death. The declaration of his sainthood was to be a day of celebration, joy and thanksgiving. It was also a big surprise. When the coffin was opened they found not the expected skeleton but a complete and undecayed body. A sign of very great sainthood indeed! Pilgrims flocked to the shrine and the ordinary life of the monastery continued until the 8th of June 793 when the Vikings came and the monastery was sacked and partly burned down. After that the monastery was continually under threat and during the 9th century there was a gradual movement of goods and buildings to the nearby mainland. The monastery was finally abandoned in 875AD, when the body of St Cuthbert and other relics and treasures which had survived the Viking raids were carried by the monks to the mainland. For over 100 years the Lindisfarne community settled in the old Roman town of Chester-le-street. The Viking raids continued and fear of further attacks took the monks and their precious relics (among them the body of St Cuthbert) on a  journey south and further inland to Ripon, before moving again northwards to Durham. At some point on this perambulation around Northumbria, tradition has it that the body rested at Fishlake, hence the dedication of the parish church to St Cuthbert.

Thinking about his story as I wandered around the village and the churchyard, I tried to imagine the spirituality and dedication of the monks to their community and its saint. Always on the move, living in fear of further raids from the Norsemen, perhaps travelling by night. This is my interpretation of them having arrived by boat at Fishlake. Which in the 9th or 10th century, was probably an island of slightly higher ground surrounded by the marshlands of the Humberhead Levels.
Posted by Stuart Brocklehurst at 20:42

A very atmospheric print Stuart. I like that you've left the faces shadowed and indistinct giving the figures a ghostly element. Very fitting with the theme of the image.