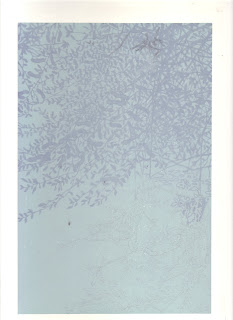 I know in the previous post that I said this print was intended to be a single colour, black on white print. However, I couldn't resist trying to make a colour version as well. So we will try to make two editions from the single block. With this base colour down I can begin to carve the block. The initial inspiration for doing this print, and more especially for making the black and white version is what will be the contrast between the two halves of the print. The top half will have dark vegetation against light water contrasting with the bottom half of the print which will have light vegetation against dark shadowed water. As I have decided to make a colour version as well there is some work to do on the bottom half of the print to get to the next stage.

On another note, the Summer Print Exhibition at the Calder Gallery in Hebden Bridge which was due to start in a fortnights time has been cancelled due to the gallery suffering damage in the flooding which occurred in Hebden Bridge last weekend.
Posted by Stuart Brocklehurst at 21:48